Selenium is a micronutrient or element present in the body in a trace amount, which, however, fulfills a number of important functions that ensure the proper functioning of the body. Selenium is part of numerous enzymes involved in the metabolic processes of cells, including those that protect cell membranes from damage by free radicals and allow the recovery of ascorbic acid. One of its key roles is also participation in the metabolism of thyroid hormones.

Selenium functions in the body

Thyroid gland is a gland with the highest concentration of selenium in the body. Selenium is a component of selenoproteins, or proteins that have antioxidant and anti-inflammatory properties on the thyroid gland. Diodinase enzymes support the synthesis of thyroid hormones – they participate in the transformation of hormones – thyroxine (T4) into the active form of triiodothyronine (T3).

Selenium deficiency may be a direct factor in the occurrence of thyroid diseases (hypothyroidism, inactivity and chronic autoimmune thyroiditis – Hashimoto’s disease). Studies have shown that among people with Hashimoto’s disease the concentration of selenium in the blood is lower than in healthy people. This element is a powerful antioxidant that protects the thyroid against the harmful effects of oxidized forms of iodine. A deficiency of this micronutrient can lead to the intensification of autoimmune processes that destroy thyroid gland cells, thereby reducing the production of thyroid hormones.

The role of selenium in protection against oxidative stress

Selenium is present in the body in the form of selenocysteine, an organic compound from the group of amino acids (has a similar structure to the amino acid cysteine, but instead of the cysteine sulfur atom is present therein selenium), present in enzymes (e.g., glutathione peroxidase), which are designed protect the body’s cells from oxidative stress, i.e. the state of imbalance between the action of reactive oxygen species and the ability to destroy the products of their action. Glutathione peroxidase protects red blood cells and cell membranes from the harmful effects of free radicals. Disturbances in the mechanisms of defense against oxidative stress caused by selenium deficiency may lead to min. to the abnormal functioning of the immune system and increase the risk of cancer. 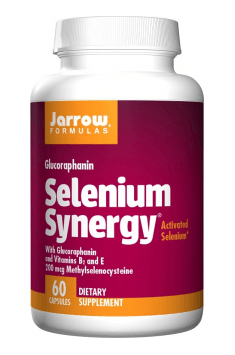 The role of selenium in protection against cardiovascular diseases

Selenium is an enzyme component that prevents the oxidation of cholesterol esters and phospholipids, thus helping to inhibit the deposition of oxygenated lipoproteins in the blood vessels. This prevents the formation of atherosclerotic processes and their subsequent complications. Studies have shown an increased risk of cardiovascular disease among people with low selenium concentration in blood <0.79 ul / L.

The role of selenium in the prevention of cancer

Cancerous stress is caused by oxidative stress and defective body functions. Selenium protects against the action of free radicals, which accelerate the initiation and promotion of cancer processes. It also reduces the ability of carcinogens to induce mutations and inhibits the division of already formed cancer cells.

In addition, selenium plays a role in the synthesis of DNA, prevention of depression, and the treatment of neurodegenerative diseases. Selenium also has a big influence on the immune system and promotes the production of immune bodies, B and T limophocytes, as well as macrophages. Selenium deficiency can also be dangerous in viral and bacterial infections, as the redox imbalance in the cell contributes to the development of infection.

Symptoms of deficiency and excess selenium in the body

Selenium deficiency leads to disorders of thyroid gland function, slowing down metabolism processes and weakening resistance to viral and bacterial infections and reducing the ability to destroy cancer cells. Low selenium concentration in the blood serum can also cause faster aging of the body and reduce the bioavailability of iodine. Diseases caused by low intake of selenium (eg in some areas of China) include Keshan disease (myocardial disease – cardiomyopathy, which most often develops in childhood), Kaszina-Beka disease (osteoarticular disease). Selenium deficiency was also observed in people suffering from phenylketonuria, cystic fibrosis, AIDS, in people with acute pancreatitis, in dialysed patients, with rheumatoid arthritis, depression

.Excess selenium can be toxic to the body. Fatal toxicity occurs in the accidental consumption of a large amount of selenium (in grams). However selenium toxicity, or chronic toxicity of selenium (selenosis) may also occur with prolonged consumption of this element even in smaller amounts (at least 400 μg per day). The symptoms of selenosis include breakage and loss of nails, hair loss, depression, nervousness, skin rashes, garlic smell from the mouth and diarrhea. In severe cases, poisoning can lead to cirrhosis of the liver and kidneys.

You can read also: Selenium in thyroid diseases