Omega-3 is polyunsaturated fatty acids. They are found in some vegetable fats and in greasy sea fish. In plants, the most omega-3 fatty acids are found in linseed oil and soy. Why are these acids needed by people involved in sports? How do they affect the body? These questions will be answered in this article.

The key factor in muscle development is protein synthesis. Omega-3 acids have a powerful effect on stimulating this process. The best action occurs when using them together with amino acids or protein. The studies have shown that protein synthesis can be increased by 30% when omega-3 fatty acids are used in combination

The regulation of protein breakdown is controlled by various processes, and studies show that omega-3 acids, especially EPA, effectively limit this disintegration. In other words, EPA has two unique functions in the process of muscle growth – it stimulates protein synthesis and inhibits catabolic processes by affecting various processes of muscle metabolism.

Impact on the immune system

When we fall ill, our immune system weakens, so after the illness it is so difficult to get back to training. Omega-3 acids play an important role in strengthening and protecting the immune system and increase our productivity. They provide important support for white blood cells that build the main cells of the immune system. This is especially important in the case of cancer. On the basis of many studies, a beneficial preventive effect of omega-3 acids in cancer is found.

During the study conducted in one of the US sports clinics, the following results were obtained – men who took omega-3 acids, lost significantly on adipose tissue and accelerated the increase in muscle mass. In addition, the intake of these acids resulted in a reduction in the level of the stress hormone – cortisol, which is a catabolic hormone, causing the burning of muscle tissue and the accumulation of adipose tissue.

Providing nutrients in the right amount is very important for people exercising. When we start to take omega-3 acids in the form of supplements or foods rich in this component, the structure of cell membranes changes. It becomes more permeable, which causes more nutrients to reach the cells.

Omega-3 acids have a significant effect on inflammation in the body. The studies carried out show that these acids lead to a reduction in the expression of genes involved in inflammatory processes. Therefore, if you train hard and hard, taking omega-3 acids will reduce the perception of painful effects of activity, such as strains on joints, tendons, ligaments, and overtraining. It turns out that these acids reduce the acute inflammatory reaction to intense physical exercise.

A group of physiologists from the University of the United States conducted research, during which young athletes took 3 grams of omega-3 acids for 7 days, and then performed very intense workouts to refuse. The results showed that the athletes who were taking them had a much smaller degree of inflammatory markers and experienced less muscular pain compared to the group that did not take these acids. Researchers suggest that omega-3 helped eliminate waste generated in response to energy changes occurring during exercise and increased anabolic processes in muscle tissue.

Omega-3 fatty acids, especially EPA, maintain a low concentration of triglycerides that are responsible for fat accumulation. Therefore, taking them during the weight loss period will speed up metabolism, reduce appetite, increase satiety and faster fat burning. It is also worth paying attention to the beneficial effect of omega-3 in cardiovascular diseases. They affect both the lowering of triglycerides and LDL lipoproteins, i.e. bad cholesterol. Supplementation with omega-3 acids will contribute significantly to inhibiting the development of ischemic heart disease and coronary heart disease.

Neuromuscular activity, brain-muscle connection, is very important during strength training. The entire training process, and therefore the increase in muscle mass, depends on the state of these connections – the speed of signal flow and the degree of its strength. The use of omega-3 acids helps improve the brain’s functioning by improving its blood supply, improving the transmission of nerve signals and strengthening neuromuscular connections.

Effects on the release of growth hormone

Somatropin – growth hormone, which is produced primarily at night, plays a very important role in the process of increasing muscle mass. For bodybuilders, increasing the level of this hormone is crucial in increasing muscle volume. Omega-3 acids support the formation of prostaglandin E1, which in turn contributes to the increase of the release rate of growth hormone into the blood. This can indirectly help in building muscle mass if you consume the right amount of protein throughout the day. 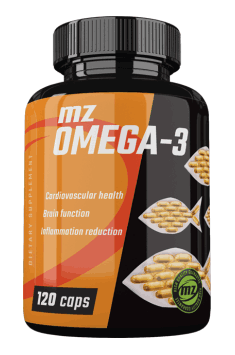